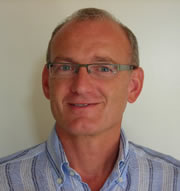 Knud Michael Persson is our external consultant, dealing with the Scandinavian Department. Michael was born in the northern part of Denmark where he has been working in the banking sector for the past 27 years. His functions have been: bank consulting, surveyor of property and deputy chief (second in command). He has financed numerous houses and summer residences. Michael travelled a lot in France and Spain and he likes learning languages. Besides his native language Danish he speaks Norwegian, Swedish, English, German, French and Spanish.

His hobbies include swimming, windsurfing, running, music, playing the guitar and the Internet.